Are you as excited for the New Hampshire Highland Games as we are?Want to find out when your favorite band is playing, or when the caber is being tossed?

The coming weeks will see Highland Games celebrations throughout the United States. ASF looking forward to attending many. We look forward to hearing and seeing news of all going on.

Visit the Association Scottish Games & Festivals website for full details and updates of Highland Games throughout the year at http://www.asgf.org/Calendar_of_Games.html

Fiona Kennedy, one of the Scottish American community’s leading ladies, is reporting regularly for Scotland Now. This week is of particular relevance since we just returned from the Isle of Skye a few weeks ago and that is where Fiona transports us to.

‘The Skyline of Skye’ tells the story of an emigrant missing his true love and also longing to see his home and that skyline again.

Listen to Fiona Kennedy, daughter of the late King of the Highlands, Calum Kennedy, perform ‘The Skyline of Skye’ as she reveals how visiting different places across the globe fires her up in her latest column for Scotland Now.

Speaking of her own personal connection to the song, Kennedy called ‘The Skyline of Skye’ “a beautiful song which I first heard my father sing when I was knee high to a grasshopper. It’s not a particularly Scottish sounding song…..probably because it wasn’t written by a Scot. It was written by a Londoner, a great character, called Bob Halfin who worked in Tin Pan Alley as an in house writer and plugger for music publishers, Campbell Connelly. Bob’s wife came from Inverness so he naturally had a close connection with Scotland and also had a way with with writing romantic songs. My father, Calum recorded this song in the 1960’s and I always loved to hear him sing it.” 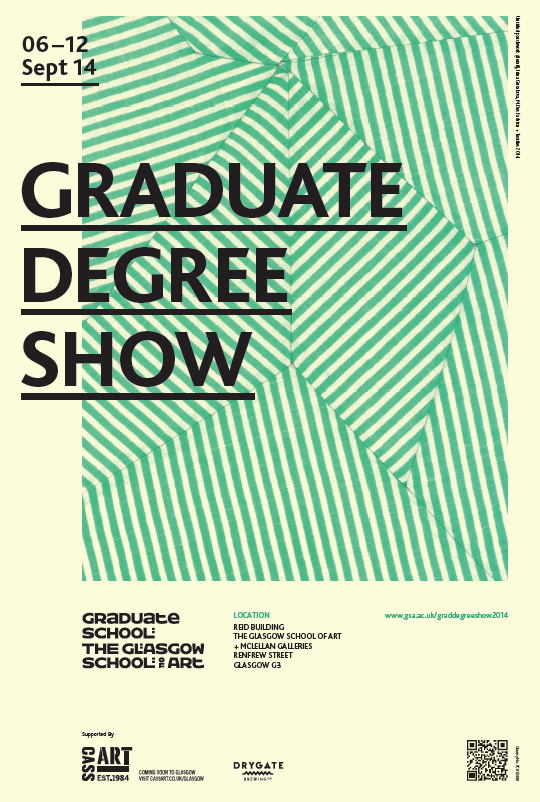 The GSA has one of the UK’s largest postgraduate communities in the visual creative arts and architecture. It has grown considerably in recent years reflecting the GSA’s international standing and research excellence, and now comprises nearly 300 Doctoral and Master’s students.

To learn more about the event and the Glasgow School of Art, visit their website at http://www.gsa.ac.uk/m/graduate-degree-show-2014/.

Masterpieces from the Scottish National Gallery, a group of ten masterpieces, will be presented by The Frick Collection, New York, from November 5, 2014 to February 1, 2015.

Amongst the paintings on show will be Sandro Botticelli’s “The Virgin Adoring the Sleeping Christ Child” (ca. 1485) never before on public view in the United States, and John Singer Sargent’s iconic portrait “Lady Agnew of Lochnaw” (1892).

Following New York the featured works will travel with forty-five additional works to the de Young, Fine Arts Museums of San Francisco – March 7th to May 31st, and the Kimbell Art Museum in Fort Worth, Texas – June 28th to September 20th.

The explosive film and photography exhibition that is ‘rebranding the ginger male stereotype’ premiers stateside at the BOSI Contemporary on the Lower East Side – 48 Orchard Street.

“A male with red hair is not seen as aspirational, culturally speaking, with very few leading men, heroes, action stars or heartthrobs played by men with red hair in Hollywood or on our TV screens,” said creator Thomas Knights of the project. “While many people may argue calling someone a ‘ginga’ or any other ‘fun’ words for people with red hair is just witty banter, for some of those on the receiving end, the impact to their self esteem is felt much more deeply and can have lasting, detrimental effects at school and way into their adult life. Red Hot is my response to this.”

Manhattan will see the global launch of the hotly anticipated RED HOT 100 art book by Brit artist Thomas Knights containing ‘The 100 sexiest RED HOT guys in the world’ and the 2015 anti-bullying calendar.

The exhibition included personal quotes next to the each of the 64 portraits, which included some recognisable faces such as Olympic gold medalist Greg Rutherford.

So far, RED HOT has raised over six thousand pounds for Anti- Bullying charities. It has been featured on the Conan O’Brien show, BBC1’s The One Show, and the BBC World News, and in publications such as Sunday Times Style, The Guardian, The Telegraph, Hunger Magazine, ELLE, LOOK magazine, Grazia, The New York Times, The Huffington Post, Monocle De Telegraaf, London Evening Standard, Daily Mail Online, and many, many more.

For more information on the New York exhibition, the project’s history, and creator Thomas Knights, visit the RED HOT website at http://www.redhot100.com/exhibition.html.