Afternoon Tea is a traditional custom in Scotland, and throughout the United Kingdom. The afternoon ritual became popular in the UK at the end of the 17th century.  In 1840 afternoon tea was first introduced by Anna, the seventh Duchess of Bedford. 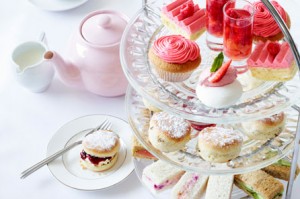 The Duchess found that she was hungry around four o’clock in the afternoon, but dinner was served late, at eight o’clock, which was the fashion at the time. So the Duchess asked that a tea, bread, butter and cake be served to her every day in the late afternoon.

She eventually invited friends to join her for this ritual, and afternoon tea breaks suddenly became fashionable social events.

The tradition of enjoying an afternoon cuppa with sandwiches, breads, and cakes is still strong in Scotland today. In the city of Edinburgh there are many teahouses, cafes, and hotels where you can spend your afternoon sipping tea and sampling sweets. The American-Scottish Society has picked three top spots for Afternoon Tea in Edinburgh: a palace, a library, and a hotel. 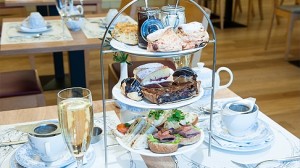 If you are craving a spot of tea, why not head to a palace and enjoy Afternoon Tea fit for a queen?

Enjoy your tea over the beautiful views from Arthur’s Seat. Afternoon Tea is served every day, between 12.00 and 3.00pm. Choose from a delectable selection of of freshly baked cakes, pastries and sandwiches, served with steaming cups of loose-leaf tea. If the magnificent surroundings have you feeling extra luxurious, champagne is on offer to sip with your Victoria Sponge Cake. If you attend Afternoon Tea at the Palace of Holyroodhouse, you can expect to have the royal treatment.

Colonnades at the Signet Library 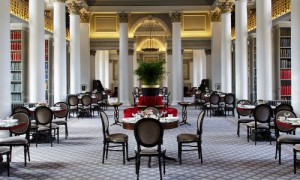 If you are exploring Edinburgh’s Old Town, head to Colonnades at the Signet Library. The grand old Library is an exquisite and interesting venue for an elegant Tea Salon.

The building is filled with history. Corinthian columns line the salon, which is surrounded by ornate balustrades. Even some of the fine silverware is original to the Georgian building. While you take in the grand setting, treat yourself to one of the decadent cakes created by the resident pastry chef. Fresh sandwiches, a selection of teas and cocktails, and many other goodies are on offer to enjoy. You’ll never visit another library quite like this. 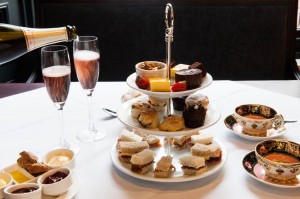 No. 11 is a sleek and modern hotel set within a charming Georgian townhouse. The hotel is just a short walk from the Playhouse Theatre Edinburgh and Edinburgh Waverley Station. Even if you are not enjoying a stay at No. 11, the Brasserie is open to the public.

The dining area is lush, furnished with velvet and elegant artwork, serving as a perfect setting for a Traditional Afternoon Tea.

The luxurious Afternoon Tea at No. 11 offers a menu of sweet and savory treats, including fresh finger sandwiches, hand made fruit scones, and a selection of pastries including decadent chocolate eclairs and mini cupcakes. Help yourself to wine or coffee, or even a bottle of sparkling wine. You can book a table from 12:30 – 5:00, from Wednesday to Sunday, each week. Enjoy the elegance of modernity, fused with the traditional charm of a quintessential Afternoon Tea.

During the cold month of February, movie buffs can find plenty to enjoy in Glasgow. The annual Glasgow Film Festival​ is wrapping up this weekend with the closing Gala on Sunday.

The Glasgow Film Festival was created to present the best of international and Scottish cinema to film lovers in Scotland. 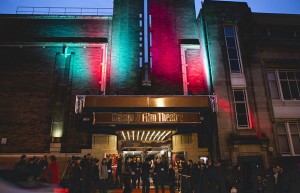 The festival includes movie screenings, discussions and lectures, festivals within the festival, workshops and even the chance to meet filmmakers from around the world. This weekend marks the end of this year’s festival fun.

The 2016 festival began on the 17th of February and finishes tomorrow on the 28th. For the past ten days there have been venues all across the city hosting special screenings of films, both new and old, and talks and workshops with directors and filmmakers.

The festival began with an opening gala in which Hail, Caesar!, the acclaimed Coen Brothers film starring George Clooney, Scarlett Johansson and Tilda Swinton, was premiered, just days after its World Premiere at Berlin Film Festival. 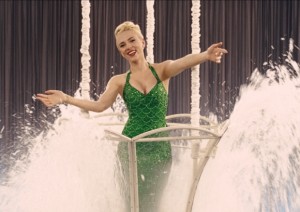 The final day of the festival will include film exhibitions such as the unique “This Is Now: Film and Video After Punk (1978-1985) Exhibition” being shown at the venue Tramway Glasgow.

There will also be screenings of the films such as Butch Cassidy & the Sundance Kid, I Am Belfast, and Peace Officer in other venues throughout the city. A special family screening of Beauty and the Beast will be held at Trades Hall, including costumes, children’s workshops, and Beauty and the Beast themed teas and cakes.

The Glasgow Film Festival’s closing gala will include the UK premiere of Anomalisa, a unique film using stop-motion animation, which was directed by Charlie Kaufman, writer of films such as Being John Malkovich and Eternal Sunshine of the Spotless Mind. This film won the Grand Special Jury Prize 2015 at the Venice Film Festival.

Visit the Glasgow Film Festival’s website to find out more about booking last minute tickets, and information on purchasing season tickets for next year.

And if you are disappointed to have missed this year’s Film Festival fun, you still have time to purchase tickets for the Glasgow Short Film Festival, the biggest competitive short film festival in Scotland. The GSFF, now in its ninth year, aims to expose new international and local film talent and celebrate the different forms of cinematic expression. 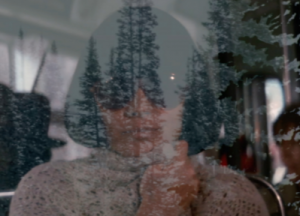 The five-day festival will include film competitions, pitching workshops, masterclasses, movie screenings, discussions and more. Discover the short film’s potential to push at the boundaries of cultural expression.

The Glasgow Short Film Festival will run from Wednesday the 16th to Sunday the 20th of March. Find out “what’s on” and purchase tickets here.