Connolly will also perform his acclaimed stand-up routine at Warner Theatre in Washington DC and The Wilbur in Boston this May. 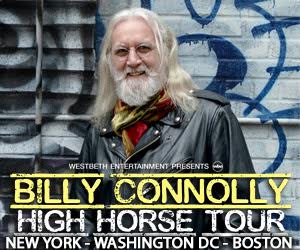 “Mischief, as ever, is the order of the day! Connolly’s a master storyteller long primed to find amusement in the ridiculousness of the human body’s failings, and his stand-up is in fine fettle, as effortlessly funny, playful and anti-conventional as ever.” –Chortle, January 2016

“In case you’re wondering where hot young comics get their inspiration, they look to legends like Connolly. Don’t miss him!” – Time Out

Tickets are on pre-sale now! Friends and members of the American-Scottish Foundation are invited to use the pre-sale code: BCHHT.