ALAN Bain, Chairman of the American Scottish Foundation, was born in London and lives in New York but his heart will always belong to Scotland.

IT IS difficult to convey to those that have not found themselves outside of Scotland for an extended period how profound the feeling of distance and loss can be and how profound and deeply rooted the connection and sense of belonging to the Homeland is.

I have felt this personally but never as keenly as when flying into Edinburgh Airport many years ago for my Aunt Betty’s 80th Birthday.

As I looked out of the window of a low flying propellor plane I felt a magnetic impulse arising out of the ground that reached into my seat in the aircraft and tugged at me.

It was the most extraordinary and unworldly sensation.

Yet I grew up in England, the son of Scottish parents.

While growing up I spent a good amount of time with my extended family that was dispersed around the Borders, Glasgow, Edinburgh and Fife.

I enjoyed them all. They were well travelled, interesting and, importantly, indulgent, especially my Aunt Mae, who developed my life long passion for white pudding, the first choice, black pudding and haggis.

Aunt Elizabeth, meanwhile, made sure that my cousins and I were indoctrinated into the finer points of Scottish History.

Alan Bain with his Paternal Grandfather outside
the Family home in Wormit, Fife

Throughout my life in America Aunt Betty would sending clippings of articles involving Scotland of which she thought I should be aware.

One I remember vividly was an article, complete with her annotations, on how the Smithsonian Museum in Washington DC had been started with funding provided by Mr Smithson, a Scot after his offer of funding for a similar venue in Scotland had been turned down.

My father, too, made sure I was acquainted with Scotland’s history. I remember climbing to the top of Ben Nevis, going to places where the Covenanters had met, seeing the Soldiers leap at Killiecrankie and being transfixed by the salmon jump at Pitlochrie while learning of that species migratory journey.

I had the good fortune to meet my late wife Linda, who claimed Macfarlane blood, at a school dance held at St Margaret’s, a girls’ school in the same area as The Gunnery, a New England boys Preparatory School to which I had been sent as exchange student for one year.  The Gunnery had been established in 1850 by Mr Gunn, of Scottish descent.

Linda and I got engaged during a Highland tour with the family.

Little did she know that this would be a precursor to a lengthy involvement with Scotland but she supported my involvement in the Foundation and a family investment in the revival of The Carloway Harris Tweed Mill. 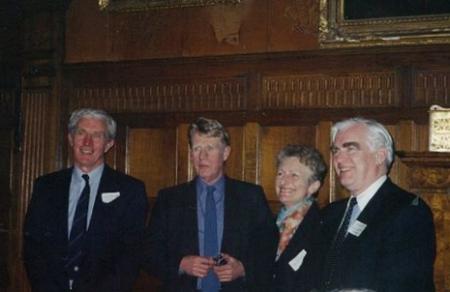 After completing National Service in the British Army, three years as an undergraduate at Cambridge and been called to the English Bar as a member of the Inner Temple, I left the UK for a three-year law degree program at Columbia University Law School in New York City.

On arrival in the City I joined  clubs with which I thought I would have a natural affinity including the St Andrews Society, the St George’s Society and the American-Scottish Foundation (ASF).

ASF was the one that I enjoyed the most because of its lively social program, particularly its Annual Scottish Ball and the Wallace Award event. The latter recognizes  Scots and American Scots who have made a significant contribution to American Scottish relations.

Most of all I was  struck by its Mission to serve as a bridge between the USA and Scotland. In 1993 ASF’s Board asked if I would be prepared to assume the presidency of the Foundation.

After more than 20 years running the Foundation I have learnt that the strength of connection and belonging is a universality, even among those separated from Scotland by many generations. I liken it to the impulse that draws the salmon back to spawn in the same place.