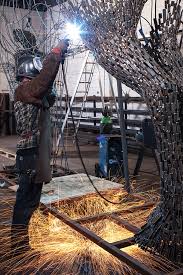 In  2014 Andy Scott’s completed his largest public work to date when The Kelpies, the largest equine sculptures in the world standing over 100ft tall, were unveiled at the       Helix Park, Falkirk.

Scott normally presents LARGE public works, and for this show he is presenting twelve bronze sculptures and two wonderful larger steel pieces.  These are shown together with maquettes (scale models) of some of his famous public works. 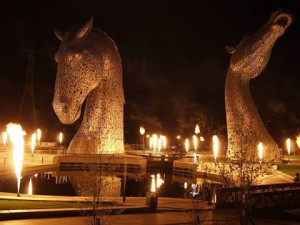 In addition to the smaller series of bronze sculptures for the show, Scott has also been collaborating with renowned silversmiths Hamilton & Inches and cabinetmakers Method Studios.  Together they are developing a bespoke sterling silver chess set to mark Hamilton & Inches’ 150th Anniversary.  All the chess pieces will be based upon the horse. 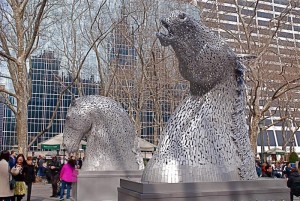 In Spring 2014, The American-Scottish Foundation® in conjunction with Andy Scott and Falkirk Council, worked to bring the Kelpies maquettes to New York, where they took up residence for several weeks on the Fountain Terrace of Bryant Park.

They looked very “at home” on the Fountain Terrace and many of us wished they could stay but they had to continue their world travels.

Award winning and celebrated Scottish sculptor Andy Scott has announced that he will hold his first major gallery show in New York this coming June at the Glasgow Caledonian University Campus.

Scott received an Honorary Degree of Doctor of Letters this past November from Glasgow Caledonian University (GCU) “in recognition of his renowned talent and creativity as a sculptor and his specialisms in the field of steel structures.” 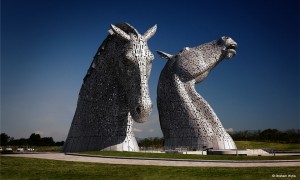 Scott, who studied at Glasgow School of Art, creates his monumental metal sculptures in his Glasgow workshop. He is most famous for his landmark Kelpies monument at Helix Park in Falkirk. He spent eight years working on the Kelpies, which are a pair of steel horse heads 30 meters high. They are the largest works of art in Scotland and the largest equine sculptures in the world. In their first year alone, the Kelpies attracted 1.4 million visitors.

In 2014, the ASF worked with Scott to bring the Kelpies to New York. The 20ft Kelpie macquettes were on display during Scotland Week 2014 on the Fountain Terrace of Bryant Park. The Kelpies attracted tens of thousands of visitors to the Plaza bringing a focus to the 100ft Kelpies which were being installed at the Helix Falkirk at that time. 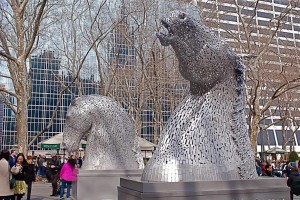 As Andy Scott says of the Kelpies, “They stand testament to the achievements of the past, a tribute to artisanship and engineering and a proud declaration of intent for the future of Scotland.” 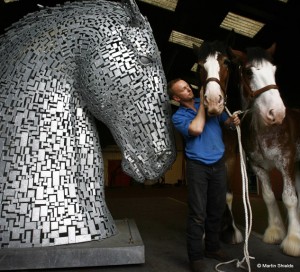 The Kelpies will feature in the upcoming New York gallery, depicted with the full bodies that one might imagine to be hiding ‘beneath the ground’ at their Falkirk site. The gallery, which will last two months from June, will also feature a show of small sculptures, photographs and other images. Scott is currently working on a series of small clay maquettes, which will be cast in bronze for the show. “The process for me now is different,” he explains,  “I am working on intricate clay models when I am usually hitting something with a five pound hammer.”

Although Scott admits that the vast amount of work threatens to “do his head in,” he is thankful for the chance to share his work with an American audience. “When an opportunity like this comes along you would be foolish not to seize it with both hands,” he said.

The American-Scottish Foundation looks forward to attending Andy Scott’s gallery show this June and will share further updates on the upcoming GCU Exhibit as they are announced.

Learn more about Andy Scott by visiting his website, here.