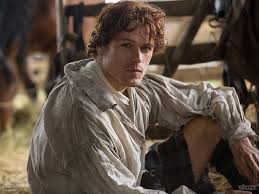 Actor Sam Heughan, who stars in the hit television series ‘Outlander,‘ shows off his Scottish roots with renditions of the classic Robert Burns’ songs, A Red, Red Rose and Ae Fond Kiss.

A Red, Red Rose is a Scottish song which Burns is said to have picked up in the country. His writing of the lyrics immortalized the traditional song. The Scottish Bard gifted the lyrics to Scots singer Pietro Urbani, who created a melody for the verses.

The song has been covered by artists throughout history. Recent renditions were performed by the likes of Jean Redpath, Pat Boone, and Carly Simon. Bob Dylan cites Burns’ 1794 song A Red, Red Rose, as the lyrics that have had the biggest effect on his life.

Listen to Sam Heughan read A Red, Red Rose in this video:

Burns wrote Ae Fond Kiss for Mrs Agnes Maclehose, with whom he had a secret relationship. He penned the lyrics after their final meeting and sent it to Mrs McLehose before she departed Edinburgh for Jamaica to be with her estranged husband.

The letter can be viewed at the National Library of Scotland, where it is a part of the Watson Autograph Collection of manuscripts.

Listen to Sam Heughan’s reading of Ae Fond Kiss in this video:

Sam Heughan’s renditions of Burns poems are part of a series released by the Scottish Government as part of a campaign to celebrate the Bard across the globe. January 25 is Burns Night in Scotland, as it is the poet’s date of birth. Celebrate Burns Night with these beautiful poetry readings.