In 1998, April 6th was declared National Tartan Day.  Since then celebrations of scottish heritage and pride have taken place throughout the United States, and nowhere more than New York who top off a week long celebration of events throughout the City, with the annual New York Tartan Day Parade.

This years celebrations took on an added dimension as the hugely popular series Outlander, premiered their second season on the evening of the Parade – and the chosen Grand Marshal for the Parade was non other than the shows leading actor, Sam Hueghan.  Heughan plays the dashing Highlander, Jamie Fraser in the series.

Outlander fans were planning for months to come together in New York for the Parade and on hearing that Heughan was Grand Marshal the excitment grew.  Many of the fans have visited Scotland or plan to, and so the Scotland’s national tourism agency VisitScotland wrapped a double decker bus for the Parade with the image of the Callanish Stones and messaging, encouraging New Yorkers to book their tickets to the land that inspired Outlander. 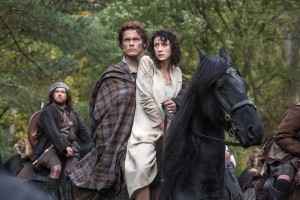 The series is filmed throughout Scotland, and already after the first series, premier locations featured in the series have seen an increase in visitors.

Locations include Doune Castle, Culloden, Falkland and Culross, all of which have enjoyed a dramatic rise in visitor numbers.

Malcolm Roughead, Chief Executive of VisitScotland, said: “Scotland Week is an opportunity for members of the Scottish tourism industry to meet with prospective visitors from the hugely important North American market, with events such as our Diaspora Breakfast always proving popular. Outlander has taken the world by storm and it is important that we capitalise on the continued success of a series in which Scotland really is the star.

“With its stunning imagery of the Callanish Stones, which are just like the ones that play such a pivotal role in the series, our bus is sure to be a big hit during the hugely popular Tartan Day Parade, which regularly attracts thousands of spectators. Hopefully it will encourage event more people to look into booking a trip to Scotland and explore the land that inspired Outlander.”

Outlander is based on the best selling series of books by Diana Gabaldon.

For more information on Outlander and Scotland, go to www.visitscotland.com/outlander