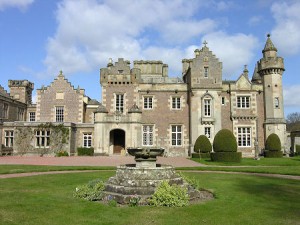 Sir Walter Scott, the famous Scottish novelist, playwright and poet, created many timeless works. One of his many lasting contributions to Scotland was his own home, Abbotsford House.

Abbotsford is located in the Scottish Borders, on the south bank of the River Tweed. This historic building is where Scott penned some of his most famous novels, spent time with other authors such as Lord Byron and Jane Austen, and kept his most prized possessions.

When Scott originally purchased the Abbotsford estate, it was a simple farm of 100 acres called Cartleyhole. On this land he built a small villa, naming it Abbotsford. Scott then began building additions to the house, which eventually became a mansion built up with sculptured stones from ruined castles and abbeys of Scotland.

Abbotsford was opened to the public in 1833, but continued to be occupied by Scott’s descendants until 2004. Today you can visit Abbotsford, which is complete with a dining area and gift shop.

NBC New York took their program ‘Open House’ across the pond to visit Abbotsford in person. The video is a fantastic personal tour of Sir Walter Scott’s home. Come experience the history of Scott’s “Conundrum Castle” and enjoy a look at the life and times of Sir Walter Scott.

Watch the video tour of Sir Walter Scott’s Home in Scotland below: