A wonderful reason to go to Washington, D.C. for the weekend, the Shakespeare Theatre Company‘s production of Man of La Mancha is receiving rave reviews for its fantastic acting, energy, and vocals. 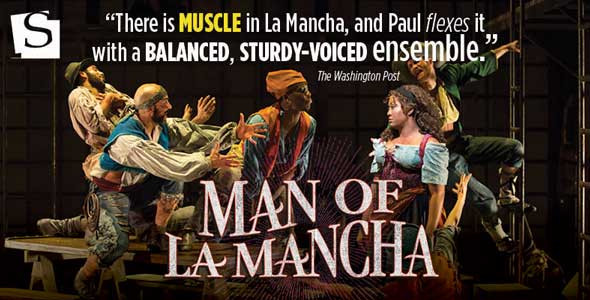 The production, which began on March 17 and runs through April 26th, has been called “a spirited production with top tier talent” by Shakespearances.com, and “a production people will be talking about for years to come” by the Baltimore Post-Examiner. Following the story of knight errant Don Quixote, Director Alan Paul‘s combination of sharp wit, moving music, and poignant storytelling brings new life to the classic tale by Miguel de Cervantes.

Take a sneak peek and watch a montage of Man of La Mancha here:

To purchase tickets while they’re still available, visit the Shakespeare Theatre Company’s website, or call their box office at 202.547.1122. We hope to see you there!