Here at The American-Scottish Foundation we are excited to hear about a new play about the historic camping trip of President Teddy Roosevelt and Scottish naturalist John Muir. 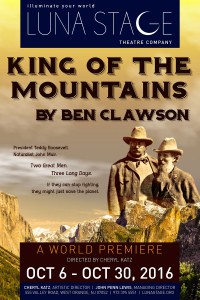 On October 8th, Luna Stage opened its 2016-2017 season with the world premiere of King of the Mountains by playwright Ben Clawson. In this historical play, audiences are invited to take a journey back to 1903, and join President Teddy Roosevelt and Naturalist John Muir at the campfire.

For three days in May of 1903, President Roosevelt and John Muir camped alone together in the Yosemite Valley. Ben Clawson’s play is a complex look at two great men: one who expected praise and reverence for his accomplishments, and one who desired to share his own wisdom and philosophy.

Watch the two famous figures go head to head on the historic camping trip that was a milestone in the ongoing battle over what to do with our public land. This trip would contribute to the forming of The National Parks Service. King of the Mountains was created with the support of The Dramatists Guild Fund, in commemoration of the 100th anniversary of The National Parks Service.

Performances will run until October 30th; Fridays and Saturdays at 8 PM and Sundays at 3 PM, at Luna Stage Company (555 Valley Road, West Orange, New Jersey), which is a 30 minute ride via NJ Transit from NY Penn Station.

“Clawson is the playwright responsible for “The Dangers of Electric Lighting,” the terrific play about Edison and Tesla a couple of seasons ago,” reviews Ruth Ross of NJ Arts Maven. 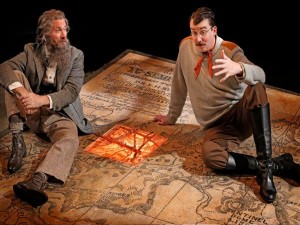 “This time out, Clawson and Luna Stage give us another mesmerizing encounter, this time between two champions of the natural world,…they have tackled a historic event, imbued with dramatic conflict, that has not only entertained us but has taught us something as well. You won’t want to miss King of the Mountains.”

To find out more information and/or purchase tickets, call the box office at (973) 395-5551 or visit the Luna Stage website, here.