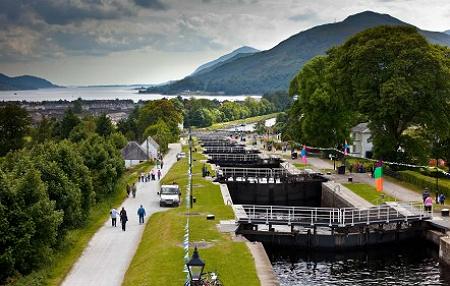 As a Member and Friend of the American-Scottish Foundation, we are sharing with you the premiere issue of The American Friends of Scotland’s Canals & Waterways e-news!

The American Friends of Scotland’s Canals & Waterways, in association with the American-Scottish Foundation, offers you a way to become involved and support the vision of the Scottish Waterways Trust who are missioned with the valuable work of supporting the protection and conservation of Scotland’s beautiful, unique waterways, from canals to historic properties surrounding the canals.

We invite you to enjoy with us, the rich history and exciting future of Scotland’s inland waterways and the people and communities that surround them – along with ways for you to become involved.

Meet the canals
Scotland’s canals were hugely influential in the industrial and social growth of the country two hundred years ago. The advance of commerce and industry across Scotland increased the need for an efficient inland transport system, and the country’s flair for invention and engineering rose to the challenge.

The ingenuity of our ancestors, left the country with a lasting legacy – five stunning canals, over 137 miles of waterway, all protected as national heritage assets are attracting millions of visitors each year.

The Union Canal (31 miles)’   The Union Canal flows into the heart of Scotland’s capital city, Edinburgh. Conceived as a direct route for the people of Edinburgh to access cheap sources of coal from the West, the canal literally fueled the country’s industrial revolution.

After only 4 years of construction, the canal opened in 1822.

Bankside industries included timber and paper mills, glassworks, foundries, breweries and distilleries (including the biggest in the world at the time at Port Dundas).

The Crinan Canal (9 miles)   The Crinan Canal, once described as the ‘most beautiful shortcut in the world,’ started as the Duke of Argyll’s canal and stretches from Crinan to Ardrishaig in Scotland’s northeast

Queen Victoria navigated the waterway in 1847, and passenger steamer companies were quick to advertise a ‘Royal Route.’
Today you can cruise the Crinan and surrounding waters on a wooden ketch with your own cook and skipper.
_____________________________________
Scotland’s Canals Now
Today, Scotland’s canals are vibrant once again. Communities are enjoying boating on restored waterways, walking and biking along the towpaths, watching wildlife, and learning about their heritage – and sharing a new future.

As a Member of the American Friends of the Scottish Waterways Trust you can enjoy a Members saving on a Cottage stay in a cottage or house along the banks of a Scottish Canal. Just one of the benefits of Membership, a great way to help support the Canals of Scotland.
Of the various ways to support and become an
American Friend of the Scottish Waterways Click Here.
For questions about the various programs please contact:
Camilla Hellman, American-Scottish Foundation, NYC
t. 212 605 0338   e. americanscottishfoundation@gmail.com