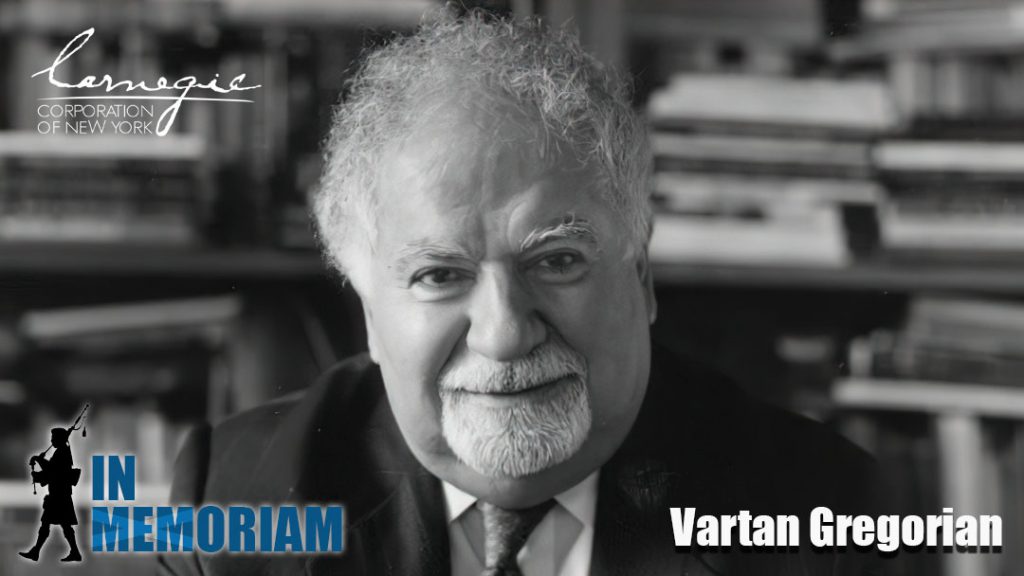 Vartan Gregorian, an international luminary, legendary educator, distinguished historian and humanities scholar, and recipient of the Presidential Medal of Freedom, died suddenly on April 15, 2021, in New York City at age 87. He had been hospitalized for testing related to stomach pain.

Gregorian served as the twelfth president of Carnegie Corporation of New York at the time of his death. During his tenure, beginning in 1997, he championed the causes of education, immigration, and international peace and security — key concerns of the philanthropic institution’s founder, Andrew Carnegie. Like Carnegie, Gregorian was a naturalized United States citizen whose experiences in a new country helped shape him, including his belief in the great importance of immigrant civic integration to the health of American democracy.

Gregorian was especially devoted to higher education and was the highly respected president emeritus of Brown University and the former provost of the University of Pennsylvania. In addition, Gregorian is renowned for revitalizing The New York Public Library during his presidency in the 1980s. The recipient of more than 70 honorary degrees and dozens of significant awards, he was decorated by the governments of the United States, France, Italy, Austria, Armenia, and Portugal. His extraordinary story is told in his autobiography, The Road to Home: My Life and Times, published in 2003.

At the Corporation, Gregorian focused the foundation’s grantmaking on aiding the development of innovative ideas and transformative scholarship. During his presidency, Carnegie Corporation of New York awarded more than 10,000 grants totaling some $2.8 billion. He will be sorely missed by all who crossed his path in whatever manner during his long and fruitful life, but especially by those of us who had the good fortune to call him a friend and colleague.