November’s concluding World Cup qualifying fixtures brought a lot of fortune for Scottish football fans as two wins in our last two games confirmed a seeded place in the World Cup Play-Off Semi Final for Steve Clarke and his Tartan Army with youngsters Patterson, Souttar and Gilmour all impressing.

Scotland traveled to Moldova on the 12th of November with a chance to cement a place in the World Cup play-offs with a game to spare, and that’s exactly what they did as Nathan Patterson fired a first half goal home as he went hard and low to beat the Moldovan keeper to his left, before Che Adams emphatically put Scotland two goals up in the second half, turning home a cross from Nathan Patterson who surged forward from right back. Craig Gordon had some goalkeeping heroics late on as he saved a late Moldovan penalty with eight minutes to go, denying the hosts a way back into the game. This 2-0 win over Moldova meant that Scotand only needed a point against Denmark on the 15th of November to earn a seeded semi-final spot in the play-offs.

This game was one which many expected Scotland to lose as Denmark have been one of Europe’s most in-form national teams as of late. Scotland’s surprise win over these Euro 2020 semi-finalists and the tenth ranked team in the world meant that Scotland had earned a World Cup play-off semi-final spot at home, in a game where they only needed a draw. Scotland went at Denmark with a lot of pace and intensity, which seemed to have caught Denmark off guard. John Souttar was able to capitalize on Scotland’s early pressure with his first international goal in the thirty eighth minute from a corner which was redirected towards him by teammate Liam Cooper. Late in the second half with eight minutes to go, Denmark looked to put the pressure on and Che Adams was able to latch onto a through pass and slot home an incredible power finish to the keepers near post to secure the win at 2-0 Scotland.

Scotland can now look forward to carrying this momentum from this successful last weekend of qualifying play and the energy and hope from the fans to spur them on in the World Cup play-off semi final for the chance of going to their first World Cup for over twenty years. Possible opponents for Scotland’s seeded semi-final playoff include Poland, North Macedonia, Turkey, Ukraine, Austria or Czech Republic who are all unseeded. With the play-offs scheduled to start in late March, Scotland fans have a while to wait for the next world cup qualifying action.

What a time to be a fan of the Scotland National Football Team, coming off the back of their first major tournament in over twenty years and now having the chance to qualify for their first World Cup in over twenty years is something all Scots can be proud of as this young exciting team finally seem to be learning how to get the best out of each other and play some very exciting football in Steve Clarkes Scotland setup. 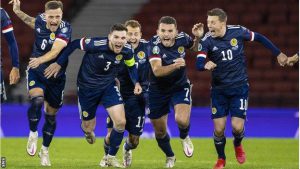