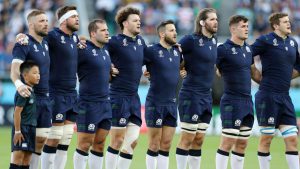 Our sports reporter Cameron Steer follows up with a Rugby Review with reports on four games of Scotland against four nations. 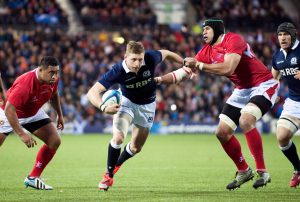 Scotland got off to a fantastic start in the Autumn internationals with a resounding victory over Tonga which ended 60-14 with Scotland notching ten tries on the day. Star player of the day Kyle Steyn scored four tries to help Scotland on their way as his club teammate for Glasgow Warriors Rufus McLean grabbed two tries on his debut. McLeans fellow debutant, prop forward Pierre Schoeman achieved his first try for Scotland in the first half. Other try scorers included George Turner and two men off the bench, Nick Haining and Oli Kebble. Kinghorn converted three of his seven possible conversions while his replacement in the latter stages of the game, Ross Thompson was able to convert two of his three attempts meaning that Scotland really could have had a wider margin of victory, which is impressive to be able to say. Overall, I would say that Scotland looked dominant from start to finish, excluding some early pressure and a late try from Tonga. 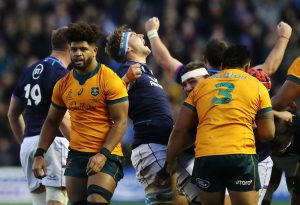 In their second game Scotland were able to just get over the line to earn their third successive win against Australia in a tight 15-13 affair at Murrayfield. Beating the third ranked team in the world speaks volumes of the way Scotland have rebuilt their fortress that is Murrayfield, which is proving to be a formidable environment for away teams to find themselves in. Scotland were able to notch two tries during the eighty minutes, one in the first half and one in the second, Australia had one – however the game could have been very different had Australia’s two tries in the first half had not been called on clear-out infringements. This was another twist to the tale of drama for the day, however it must be said that Australia’s performance in the first half did not look to warrant two tries, nor were they denied the victory by Scotland, but rather by themselves despite growing into the game as the day went on. Hogg impressed on the day with multiple bursts at the Australian defence one of which in the first half where the Aussies were lucky to escape the drive with just a penalty. Scotland had the majority of penalties for the day, and adopted the policy to not have a shot at goal for the early stages. This plan came to fruition on the third go around with an attack in which a well executed and very fluent shift drive at a lineout, to be finished off by maverick Hamish Watson. As Australia worked their way into a flow they were able to get their only try of the day on the board just four minutes into the second half. Which then set up a good duel for the rest of the later stages. This culminated in the last ten minutes of play where Australian pressed hard, however a timely and inspired turnover followed by a counter saw Scotland carry the ball deep into Australian territory to see the game out in safety. A fantastic result against one of the worlds best teams to build on the momentum from the Tonga game. 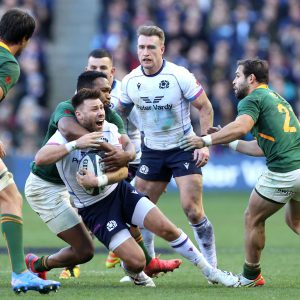 On the day that Stuart Hogg tied with Tony Stanger and Ian Smith Scotland’s record try scorer, the world champions South Africa handed out a punishment to the tartan army on our own turf at Murrayfield. The game ended Scotland 15-30 South Africa in a match where South Africa dominated through set pieces and through the breakdown which allowed them to lay a foundation for their resounding win. By the end it was all square for tries with Hogg notching two for Scotland and Mapimpi grabbing two for the visitors giving a score line of Scotland 8-10 South Africa at the half time break. It was in the second half where it all fell apart for Gregor Townsend’s men with the physicality of the visitors dictating the play allowing them to dominate the penalty count before eventually kicking their way out of sight in the closing stages. A disappointing result against the world champions which would have been closer had we managed the physicality of the game better. 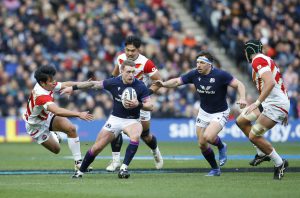 Japan fell to Scotland 29-20 at Murrayfield on a momentous day for captain Stuart Hogg who scored his twenty-fifth try for Scotland to take his place at the top of the all time try scorers list for the national team as the full-back moved beyond Tony Stanger and Ian Smith who are now both joint second of all time. Four well spaced out tries from Van Der Merwe, Hogg, Graham and McInally help Scotland grasp a positive result against a strong Japanese Side, with Russell managing three conversions and securing a penalty in the seventy-ninth minute to seal the win. Japan had a late try from Tatafu in the sixty-fifth minute as well as five penalties secured by Matsuda spaced evenly throughout the game which made up their twenty points. Scotland had to deal with Japan attempting to run the ball frequently, bringing it all the way into Scotland’s twenty-two but the Scots were able to halt the momentum of these consistent bursts of attack by slowing the ball and the play down well. It was a cagey affair with Scotland handing points to Japan for penalties which could have easily been avoided on another day. Nonetheless, Scotland will be happy with a great win over a team which shattered their world cup dreams just two years prior. Scotland will also be proud to earn three wins from four tough Autumn Series games.