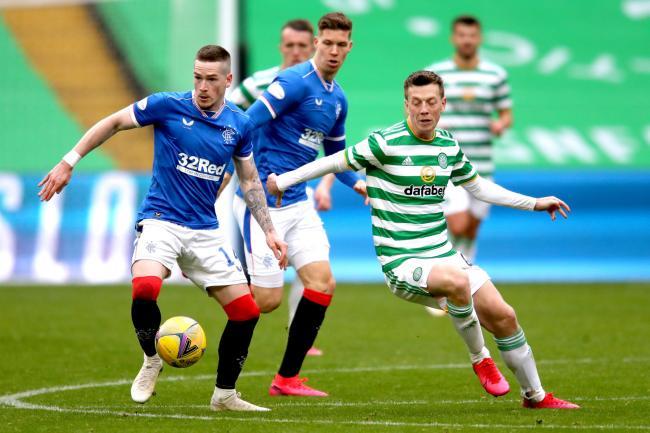 There was a strange feeling in the air coming into this Old Firm match up on the 21st of March 2021. Firstly, the absence of fans once more feels like a lot of the meaning of the occasion is lost, furthermore Rangers having clinched the title the previous match week, and Celtic engrossed in their battle for second place with the likes of Aberdeen and Hibernian meant that Rangers really had nothing to lose – well, apart from their pride in the derby that is.

Further adding to the strange feeling around the occasion was how Celtic entered the game day having had a break in the previous match week whereas Rangers had to play in europe on the Thursday night (18th March), being knocked out the Europa League on aggregate to Czech side Slavia Praha.

Now the Slavia Praha game was emotionally and physically draining in its own right for Rangers who really struggled to take hold of the game and create anything dangerous. Two Rangers players receive red cards for their lack of discipline. Praha played better football and deserved to win on the night however their victory was tainted by an alleged racist incident between Gers’ Glen Kamara and the alleged perpetrator Ondrej Kudela. A disgusting lack of respect for another human being and lack of sportsmanship to say the least.

This event meant that there were bigger issues at hand in the world of football than the rivalry between Rangers and Celtic going into the Old Firm. This was encapsulated when Scott Brown the Celtic captain crossed the halfway line during Sunday’s warm ups to approach Kamara and express his and Celtic’s support for the Rangers defender in the fight against racism. Some things really are bigger than football!

Nonetheless, this spectacle was still a big occasion for both clubs and as promised, was a tasty affair between the sides which eventually ended in both teams sharing the points on the day meaning that Rangers are still on course for an unbeaten run in the SPFL. Celtic began the game on the front foot creating some very good chances, eventually leading to Elynoussi heading home from an Edouard cross in the twenty-third minute of the game. Celtic had a look of dominance for the most part of the opening stages and almost had a penalty if it weren’t for the referees keen eye to see that Celtic striker Edouard simulated his fall in the box under pressure of the Rangers defender – Edouard was subsequently shown a yellow card for simulation.

Following this Celtic kept piling on the pressure and looked to expose Rangers at the back some more, however Rangers goalie Alan McGregor had other ideas as he pulled off some incredible saves as the last line of defence. Then – against the run of play – Morelos popped up at the back post to head home the equalizer from a corner in the thirty-eighth minute with a great piece of attacking intelligence and anticipation to bag his first Old Firm goal in 13 games between the two sides. On the other end, Celtic fashioned an incredible chance for Edouard who really should have scored had it not been for the fantastic exploits and awareness of McGregor – saving the low driven shot with his legs and managing to scramble and get his hands on the loose ball before it crossed the goal line. Not long after this key save did McGregor save another header from Elynoussi at point blank range from a corner kick to keep Rangers level.

Towards the end of the game, both sides saw some half chances but it was Celtic who were afforded the two final key chances of the game. Edouard struck a volley from range which looked destined for the back of the net, however it was that man McGregor again who met the powerful drive very athletically to push it wide. Last key chance of the game fell for Celtic after winning the ball back and counter attacking two versus one against the Rangers defence but once more Mcgreggor had the answer. Though points were shared, both sides fought very well, and either could have clinched all three on the day.  This was a very exciting and fun to watch Old Firm. Though man of the match was awarded to Edouard for his industry, intelligence and skill on the day, I would award the MOTM award to Alan McGregor, the Rangers goalkeeper who seemed to be the difference on the day.