Tartan Day is a North American celebration of Scottish heritage on April 6, the date on which the Declaration of Arbroath was signed in 1320. It originated in Canada in the mid-1980s. It spread to other communities of the Scottish diaspora in the 1990s. In Australia the similar International Tartan Day is held on July 1, the anniversary of the repeal of the 1747 Act of Proscription that banned the wearing of tartan.

On March 9, 1986, a ‘Tartan Day’ to promote Scottish heritage in Canada was proposed at a meeting of the Federation of Scottish Clans in Nova Scotia. Jean Watson, President of Clan Lamont, petitioned provincial legislatures to recognize April 6 as Tartan Day. The first such proclamation was by Nova Scotia in April 1987. On December 19, 1991, in response to action initiated by the Clans & Scottish Societies of Canada, the Ontario Legislature passed a resolution proclaiming April 6 as Tartan Day, following the example of other Canadian provinces.

Meeting in 1997 in Sarasota, Florida, the Scottish Coalition USA looked to see Tartan Day recognized in the US as it was being observed in Canada.

After the U.S. Senate officially recognized Tartan Day in 1998, Alan Bain, Chairman of the American Scottish Foundation, was tasked by The Scottish Coalition USA to organize a Tartan Day celebration for New York City and in 1998 the first Tartan Day Parade, consisting of two pipe bands and a small but spirited group of Scottish Americans, including Grand Marshal, Cliff Robertson, walked on a sidewalk from the British Consulate to the United Nations.

The first permitted parade was in 1999 in Central Park. Since then it has flourished to include many bands and thousands of participants, including clan members and individual marchers. 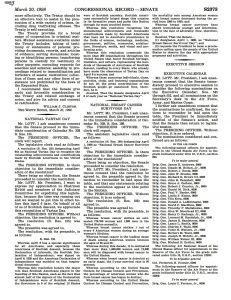 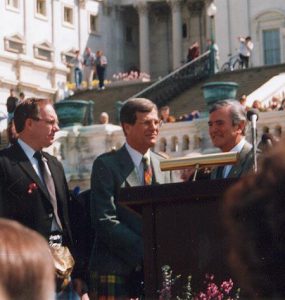 In 1998, the Scottish Coalition USA and other Scottish American organizations with the support of Senator Trent Lott (R-MS) successfully lobbied the Senate for the designation of April 6 as National Tartan Day “to recognize the outstanding achievements and contributions made by Scottish Americans to the United States”. Senate Resolution 155, passed on March 20, 1998, referred to the predominance of Scots among the Founding Fathers and claimed that the American Declaration of Independence was “modeled on” the Declaration of Arbroath.

On March 9, 2005, the United States House of Representatives unanimously adopted House Resolution 41, which designates April 6 of each year as “National Tartan Day”. H.Res.41 Chief Sponsors were Congressmen Mike McIntyre from North Carolina and John Duncan from Tennessee, who are the founding co-chairs of the Friends of Scotland Caucus in the U.S. House of Representatives. This led in turn to the recognition of Tartan Day Observance on April 6 each year.

In 2002 The American-Scottish Foundation partnered in the formation of the National Tartan Day New York Committee with the St Andrew’s Society of the State of New York and the New York Caledonian Club to oversee the Parade’s growth and give oversight to the associated events of the week in New York.

In the formative years of 2000-2003, the American-Scottish Foundation also arranged Tartan Day programming in Washington D.C.

The Tunes of Glory Parade organized by Magnus Orr and Thomas Grotrian in 2002 included 8,250 pipers and drummers marching through the streets of New York, led by Sir Sean Connery and New York City Mayor Michael Bloomberg.

After the U.S. Senate officially recognized Tartan Day in 1998, Alan Bain, Chairman of the American Scottish Foundation, was tasked by The Scottish Coalition USA to organize a Tartan Day celebration for New York City and in 1998 the first Tartan Day Parade, consisting...